On the bright, sunny morning of June 13, Cobb Hill was waking up, and the soon-to-be graduating 2018 Leadership Upper Valley class was just arriving for their final meeting. Before the ceremony at Harpoon Brewery, the class spent their final day reviewing the experience of the 10-month program while enjoying the scenery and touring the facilities of Cobb Hill’s farm and co-housing. I had the opportunity to view this day from the outside, as someone who had not experienced the previous year of Upper Valley exploration with the class.

The day began with a reflection on the varied lessons the class had learned in their monthly sessions together, as well as a breakfast of eggs and pastries. Then the class was split into groups and shown around Cobb Hill by residents—some original founders, some newer. We saw the houses, the farmstand, the community gardens, the shiitake mushrooms they grow, and learned about their methods for using one furnace to heat all of the houses, as well as the challenges and rewards of making big decisions as one community. Then it was back to the common house for a very welcome lunch and a discussion of how each member of the class could carry forward what they’d learned into their own lives. They also made lists of what their own unique skills and needs were and saw how they could help each other.

One of the most enjoyable parts of the day was during a set of outdoor team-building exercises. After playing a game to learn new facts about each other and shared traits and identities, they were divided into groups and left to their own devices for a short while. The class started out by staying in their groups but soon began to pick up the basketballs, footballs, and hula hoops that had been sitting in the field. Suddenly, the groups were abandoned entirely, giving way to a free-for-all game. When the groups did eventually come together again, they had to use their communication and cooperation skills to lift tennis balls on strings and carry them all the way up the hill together, without dropping them. After each group had succeeded, we returned once more to the common house, where the class stood in pairs and described how each other had grown over the last ten months. Some talked about the great things they had seen their partners achieve, some told funny stories, and some looked forward to many more years of friendship.

Once the class had disbanded and reconvened at Harpoon Brewery for the graduation ceremony, the atmosphere became less serious and a bit more casual. People wandered, carrying drinks and chatting, playing a giant lawn version of Jenga. After a year of thoughtful, sometimes intense monthly meetings, they had the opportunity to get to know each other in a more relaxed environment. After some heartfelt speeches from program managers, alumni, and members of the class themselves, the class received their certificates and a warm dinner. They sat at picnic tables, laughing and struggling not to get barbecue sauce on their brand new certificates, celebrating their achievement. 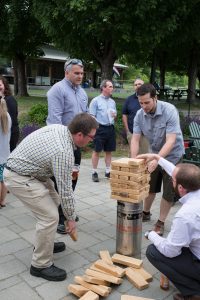 At the very beginning of the day, program manager Rob Schultz shared a quote describing the difficulty of being confronted with a “9,000-pound boulder”—an enormous problem. These new alumni seem to have learned, as class member Alison Marchione pointed out, that the boulder gets a lot lighter when more hands are lifting it.