This year’s Super Quest was designed in honor of the beloved
Miraculous Trees Quest, written by Ted Levin and Steve Glazer in 2000.
The Quest ended at a mature American chestnut tree, the last known
tree in the region. The tree finally succumbed to the chestnut blight in
2016, causing us to close this Quest. 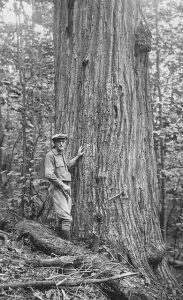 It’s hard to believe, but the American chestnut was once the most common tree found among Eastern forests.[1] These “miraculous” trees were a staple among timber with its straight grains, light weight, and workability.[2] Sadly, American chestnuts are now an extremely rare site. Just over 100 years ago, the Chestnut blight was accidentally imported into the US from China and has since devastated the American chestnut population.[3]  When one encounters an American chestnut today, it’s a truly special experience.

What is the Chestnut blight? 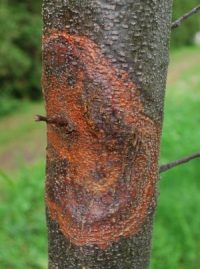 The American chestnut blight is a “wound pathogen”—a tree disease that enters through openings on tree bark. Specifically, the blight targets the vascular cambium (the layer of tissue directly beneath the bark) and shuts down movement of water and nutrients within the tree.[4]

While the chestnut blight does not necessarily kill the tree, it does stop growth from the areas above the infection site.[5] No new tissues can grow, so the nutrient flow in the tree is stunted as old tissue is sloughed off. In many cases the tree will die, but there have been cases where trees are able to survive with blight infection.

Another effort around combating the chestnut blight is the use of hypo-virulence. Hypo-virulence, meaning “reduced ability to infect,” introduces a viral strain that attacks and weakens the blight.[8] By introducing this strain to individual trees, some American chestnuts have recovered. However, the blight is able to spread faster than the virus, so a large scale plan for how this would work is still in the making.