Bartlett’s Blueberry Farm opened last weekend for their 31st year of pick-your-own. Heidi Bartlett said that their bushes made it thorough the harsh winter and the berries are looking great! Blueberry season in the Upper Valley is short (lasts about a month), so take the family on an adventure and visit Bartlett’s Blueberry Farm this weekend. Heidi also said I could shared her secret berry cobbler recipe (see below).

While in the Newport area, take a walk along the scenic Sugar River Rail Trail and visit Sanctuary Dairy Farm Ice Cream for a cone. And, if you go on Friday you can visit the Newport Farmers’ Market (3-6 pm) with live music, story time for kids, and dozens of local food and craft vendors (including my favorite popcorn – Howln’ Good Kettle Corn). 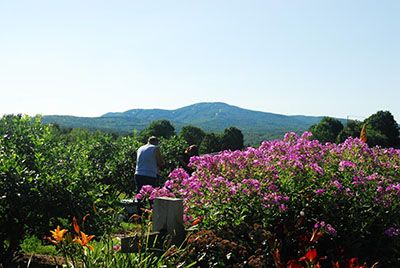 In the early 1970s Bill Bartlett would often pass the Calkin Farm on Bradford Road in Newport and see Tom Calkin, not a young man at the time, painstakingly planting infant blueberry bushes and wondered, “When would he ever make a profit?” Blueberries take about eight years to mature.  Bill never imagined that one day he would be the owner of those blueberry bushes.

Ten or so years later, Bill asked Tom if he would ever consider selling the farm and “after receiving a firm ‘no’ for an answer, he went on to throw out a figure to Bill and wife Heidi. Bill was self-employed (more on that later) and felt that the times of year when a blueberry crop required the most effort would fit into his work schedule well. Besides, the family needed a larger house for their two boys, and he and Heidi needed to begin a plan for their own retirement.  Being of good frugal New Hampshire stock, they put their thoughts together and felt with belt tightening they could make the purchase price. And not only did they get five acres of twelve year old  blueberry bushes in the deal, they got the undying support of Tom Calkin with his encyclopedic knowledge of the fruit and his fanatical system for their care.

The spectacular location of the farm house looking toward Mt. Sunapee at the top of the hill of blueberries was a bonus in the deal. In 2001 the farm was named a Farm of Distinction by the New Hampshire Department of Agriculture, Markets, and Food.

With the land, came 5000 mature blueberry bushes planted in rows, 300 feet long, eight feet apart, and 60 plants per row. Critical to a healthy and productive blueberry bush is fastidious pruning and, says Bill, “our detailed style of pruning is a holdover from Tom who gave us hands-on training in Spring 1985 after we bought the place. We try and prune to heights where the average picker can reach the top berries.”

Today many large blueberry farms use a pneumatic pruner, but in April, Bill, Heidi, son Ben,  can be found lost amongst the bushes pruning by hand. Careful clipping assures better air circulation and reduces conditions for disease. The foursome begin by knocking off twiggy branches with a glove and then prune winter damaged and diseased larger branches and, since they can see fruit buds even before the leaves come out, they cut off interior buds to force fruit to the outside of the bushes for fatter berries and easier picking. “We figure it takes 250 man-hours to prune 5000 plants which means three minutes a plant.”

A blueberry farm has worked well for Bill over the years because before his retirement he was self-employed as a “hoof trimmer,” primarily of cattle. (He appeared on the TV show “What’s My Line?” in 1970). When asked how he chose his profession he said matter of factly “No one else was doing it.”  So he went right to work to devise a tilt-table mechanism for the cows to lie down in with their hooves held still using old seat belts.  “Cows are stubborn but I really enjoy them, so I got along well and never really had any trouble. I loved my job and the farmers.” He boasts that he never received a bad check in 35 years of work. “People in the farming world are in a different world from everyone else.” But in 2005 he noticed he was losing interest and felt that he was not doing the job that he was capable of doing so he retired and returned to his farm and blueberries full time.

In early July before picking begins, the Bartletts, with help from friends and neighbors, put up the netting which prevents the birds from eating about 30 percent of the crop. As with the cow tilt-table, Bill used his ingenuity to spread the netting. He adapted an old corn sprayer that was built to straddle the rows of corn. By adjusting its height to be above the berries and attaching a roll of netting onto a Gerry rigged mechanism, he unrolls the netting over the bushes and the crew on the ground ties it down. After the picking season, he also uses the machine to roll up the netting.

In mid-July when the visitors appear, Bill, Heidi, Ben and now grandsons Will and Luke (not pictured) personally show the pickers the rows marked with each berry variety and which rows are the current best for picking. “Tom Calkin, could not stand people “tasting” berries and it’s true, some people just come to eat,” says Bill. So the Bartletts established the “Sin Bin,” an idea they read about in the paper that was used by Guilford, Connecticut based Bishop’s Orchard. “If the wife picks while the husband eats, I have even seen the wife tell her husband to put money in the Sin Bin,” reports Heidi. At the end of the season the funds collected go to a designated group or organization in the area.

Lightly toss above ingredients together. Spread in a greased 8″ x 8″ pan, dot with butter.

Blend together butter and sugar. Add egg and mix well. Stir together next four ingredients and stir into egg mixture alternately with milk. Drop spoonfuls over blueberry mixture. Bake at 375 degrees for 25-30 minutes. Serve with whipped cream or vanilla ice cream.