I’m a big fan of salads that aren’t just plain old salads. Not that there’s anything wrong with those, of course. But salads don’t all have to be a big bowl of lettuce. Maybe you can already figure that out from some of the other recipes I’ve posted. Raw or cooked. Hot or cold. Really, a salad can be whatever you throw together and toss with dressing. 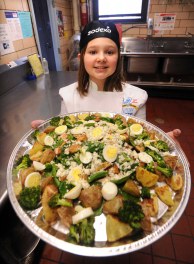 One spring, I was a judge in Sodexo’s Future Chef Challenge, where Rutland fourth and fifth graders competed with their favorite salad recipes. With tasty combinations like tortellini salad, southwestern salad, Greek salad, and Thanksgiving salad, those talented kids proved the point I’m trying to make.

The combination of grated raw beets, lightly cooked rainbow chard, bright, juicy oranges, and tangy balsamic dressing in this salad is refreshing and simple. It’s a good way to get beet detractors to give the vegetable another try. They’ve probably never had them like this – crunchy and raw so that they might be surprised this time around. At least, that was my experience when I served this for my sister – who actually wanted to keep the leftovers after dinner.

On the other hand, the quick-cooking down of the chard takes away some of the bitterness people often encounter when trying the green raw. Yet, that aspect is no longer an issue here. All around, this salad will change your preconceptions. Give it a try at your next picnic.

Peel the beets and either grate them on a box grater or in a food processor. If you’d rather not have your hands stained purple, handle the beets with paper towels or wear gloves. You should have about 2-3 cups of grated beets in the end.

Wash the chard. Shake to remove excess water, but no need to dry. Separate the stems and ribs from the leaves either carefully with a knife or simply tearing by hand. Give the ribs a rough chop. Stack the leaves on top of each other and slice them crosswise into thick ribbons.

Heat the olive oil in a large pan over medium heat. Add the garlic and stems and cook until softened, about 5 minutes. Add the leaves of the chard and season with salt and pepper. Cook for 3-4 minutes, stirring occasionally until the leaves have wilted and taste tender. If the leaves still taste bitter, season with additional salt. Transfer the chard to a large bowl and allow it to cool for a few minutes.

To make the dressing, combine ingredients in a small jar and shake until thoroughly mixed.

Combine the greens and the shredded beets, and toss with the vinaigrette. Serve, topping each plate with goat cheese, if using, and orange pieces.

This salad will keep refrigerated for up to one week but wait to dress and top with goat cheese until just before serving.

Adapted from Elizabeth Passarella at The Kitchn