When the temps range from cold to colder, it’s prime season for just about everyone to get sick. And although the science is inconclusive, chicken soup just has a way of making us feel better.

It’s very much as Steinbeck wrote in East of Eden, “The lore has not died out of the world, and you will still find people who believe that soup will cure any hurt or illness and is no bad thing to have for the funeral either.” So give in to the lore and make yourself a pot of soup, chicken or otherwise, even if you’re feeling fine – it sure can’t hurt. 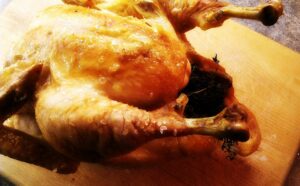 I was roasting a chicken and couldn’t just let the remaining meat and bones go to waste. That wouldn’t be wise. Instead, I pulled off the meat left on the bones and saved it for the soup. I then broke up the bones a bit and browned them in a little oil in a large pot. I added a few vegetables I had hanging around – onion, carrot, celery – with a bunch of thyme and covered the contents in water. The pot was left to simmer – not boil, for a couple of hours. Sure, it’s a little time-intensive, but not effort-intensive. I let this simmer while I did other things. Afterwards, I drained out the solids (you don’t want to use the vegetables or bones directly for the soup at this point, all the flavor has already been drained) and had about four quarts of one nice stock.

Once you have your stock ready to go, you’re all set for the soup. If you aren’t using your soup right away, the stock can store for about a week in the fridge and a couple of months in the freezer. The longer you let it set, however, the less flavor it will have.

Or, if you’re using broth from the store – that’s fine too. But what’s the difference between stock and broth anyway?

As always, use this recipe as a loose guide. I like my soup heavy on the veggies and, in this case, low on the meat. I used rice here, but any grain or pasta can work. I would suggest cooking separately and adding in at the end to avoid having it plump up and take over your soup. Make it how you like.

Start cooking your rice, grain, or pasta separately, as you would typically to make two cups.

In a large pot, saute the onions, celery, carrot, garlic, and other vegetables with the bay leaf. Let cook for about ten minutes and season with salt to your liking. When everything is mostly tender, pour in the broth or stock with the thyme. Simmer for 20 minutes, tasting and stirring once in a while. Add the chicken and simmer 5 minutes more. If you have some additional frozen veggies you want to mix in, like corn, this is a good point to do so. Add a splash of lemon juice – this really helps bring out the flavor – and the parsley. Stir. Adjust seasoning, if needed. Turn off the heat. Ladle the soup into bowls and mix some rice into each.