Collaborating Across Town Lines in the White River Valley 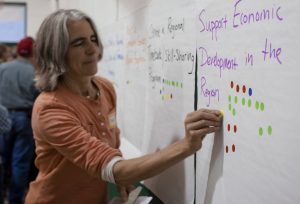 Among the teams is the White River Valley Consortium, a coalition of 14 communities surrounding Randolph and Royalton that will promote local housing opportunities for entry-level workforce and beginning entrepreneurs. Vital Communities is serving as the fiscal sponsor and hosting the WRVC Project Coordinator, Sarah Danly. This sector of housing “is essential for keeping our young people in our communities, encouraging innovation in our economies, providing a good quality of life, and attracting new residents,” according to the Consortium’s page on the Vital Communities website.

The Consortium was created in 2020 thanks to a WCC planning grant to bring towns together to work on shared concerns that are often too big and complex for towns to tackle on their own. It is currently led by a Core Team of nine people. “We are the second most rural region in the state, next to the Northeast Kingdom, and yet there’s so much opportunity,” said Core Team member Joshua Jerome, Randolph’s Director of Economic Development. “Organizational and institutional silos permeate the White River Valley so we believed the WCC process could catalyze breaking those silos down and create a new way of collaborating. By doing so we could effectively create what we dubbed ‘21st-century barn-raising,’ and begin to move the needle on issues that matter in the region.”

The Consortium’s first challenge is to recruit representatives from all 14 towns to serve on subcommittees and workgroups that will decide what projects to pursue over the three-year grant period. “We would like representation from all communities and we want to involve individuals across sectors who have that lived experience [of housing needs], to be part of the decision-making process,” said Jerome. “They don’t need to be already educated about housing. Part of the process will involve that education. But we really want a lot of different viewpoints and perspectives.” 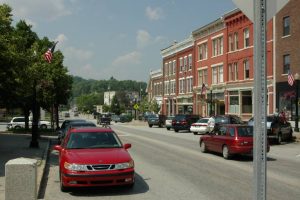 The WCC was created by the Federal Reserve Bank of Boston to advance collaborative efforts to build healthy economies and communities in northern New England’s rural towns, regions, and smaller cities. Four Vermont communities were initially awarded implementation grants in 2020. The program’s expansion to eight teams in Vermont means that an additional 224,000 residents could potentially benefit from Working Communities Challenge efforts in the state.

“These teams have come up with thoughtful solutions to improve conditions that prevent their communities from flourishing economically,” said Boston Fed Executive Vice President and Community Affairs Officer Prabal Chakrabarti. “We are grateful that the state of Vermont recapitalized their commitment with additional investment for the on-the-ground, collaborative work that these teams have already moved forward.”

The three other new Vermont grant recipients also have a specific focus and will work in designated regions statewide:

The newly funded teams were among eight applicants for four $300,000 grants that were awarded in 2020, when the Boston Fed launched the program. The teams that received grants then – from Winooski, Lamoille County, Greater Barre, and the Springfield Area – are building community-based programs and initiatives around issues including workforce development, labor force participation, and encouraging entrepreneurship.

“The Working Communities Challenge program puts the power in the hands of local leaders and community members to create the change they want to see in their communities,” Gov. Phil Scott said. “By securing this funding and bringing more regions of the state into the program, we are further enhancing the innovative ideas these groups have and ensuring more Vermonters benefit from the results of the work they do in the years ahead.”

The timing of the latest awards “couldn’t be better,” according to Ben Doyle, a member of the Vermont’s Working Communities Challenge steering committee, which helped select the grant recipients.

“The pandemic has exacerbated the challenges rural communities are facing, they really need innovative approaches to change local systems that aren’t working anymore,” said Doyle, president of the Preservation Trust of Vermont. “These four teams will be well-positioned, and they’ll have the necessary resources, to lead the way.”