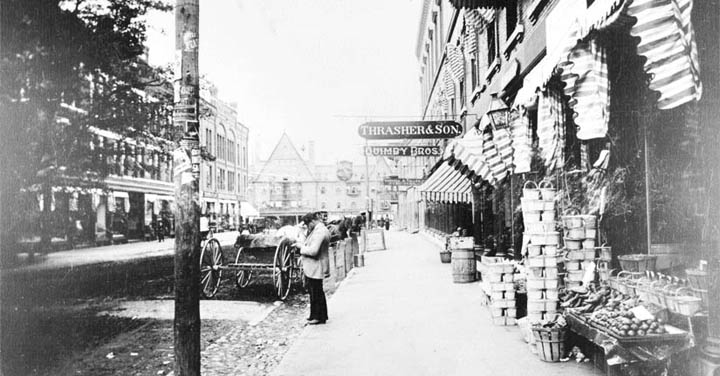 Claremont in its 19th-century heyday. Courtesy of the Claremont Historical Society.

As part of an effort to better engage the southern portion of Vital Communities’ 69-town region, over five months in 2019 VC’s Mike Kiess visited towns and cities throughout what has come to be known as the Route 11 Corridor. These 23 municipalities clustered along that state highway and the Sugar and Black rivers, from Wilmot,NH, to Westminster, Vt.

“I’d usually set up one or two interviews in advance,” Kiess said. “But what was most fun was getting to the town a few hours early and walking down its main street and finding a place that clearly locals were going into,” such as a coffee shop or convenience store. “I’d start talking to people and asking them about their community, what they liked about it, what concerned them. I’d end up coming away with 8 or 10 substantial conversations in addition to the one or two I had planned. I’d always find people who offered a great perspective I wouldn’t have heard otherwise.”

What did he hear during this “diner diplomacy”? “People expressed a great deal of pride,” he said. “People are really devoted to their communities. They are honest about the challenges and shortcomings, but they want their kids to have a good experience growing up and feel that often it’s their town that makes that possible.”

Those dozens and dozens of conversations, coupled with lots of statistics about demographics, economy, and more, went into a 38-page report (“Route 11 Corridor Outreach Report”) presented in a February meeting of people from throughout that region. Now, after having to pause while everyone adjusted to the demands of the pandemic, the group will come together digitally for its second meeting on Tuesday, June 23, 4 pm.

In the February meeting, participants came up with a varied list of ways people in their region could work together to enhance life for its residents—including neighborhood clean-ups, shared sports and arts events between towns, workforce internships, volunteer-supported housing upgrades, composting, and community pride events. At the June 23 meeting, people will choose efforts to sign on to and will decide on next steps.

A lot of the faces in the room belong to people Mike met in those town visits and invited to participate in the longer-term effort. They include June Sweetsir and Hillary Halleck (Charlestown), Stacey Hammerlind (Newport), Beth Daniels (Southwest Community Services), Gary Fox (Rockingham), and Elyse Crossman (Claremont).

These 23 towns haven’t seen themselves as a region, historically. Older residents remember intense rivalries between high school sports teams. The area shares the impact of a decline in the industry that in the 19th-century built the urban centers of Claremont and Springfield. The region was also affected by the early 1960s decision to route Interstate 89 through Lebanon and Hartford rather than what was then the more populous and developed communities of Claremont and Springfield.

Cooperative agreements exist between towns for certain functions, and shopping and restaurants draw people into the region’s urban downtowns and shopping centers. Nor is it necessarily the goal of this process to get Route 11 to see itself as a “Lower Upper Valley.” “We’re not starting something new,” says Kiess. “We’re just weaving together relationships that already exist and looking for how Vital Communities can support these efforts.”