As much as I love cooking, I have to admit that sometimes I don’t do so well in the breakfast department. On mornings when I’m just trying to get out the door and perhaps the kitchen sink is still full of last night’s dishes (and this is more often than not, as I’m not the most efficient dishwasher), I’ve resorted to several poor choices. Everything from a piece of whatever I’ve baked last – sometimes this isn’t completely terrible (biscotti) other times there’s no hope (cupcakes, pie, cookies) – while some days I just try to fill up on coffee and maybe a spoonful of peanut butter. But continuous consumption of strong, black coffee on an empty stomach will do a number on your digestive tract.

OK, I’m exaggerating a little. I was on a consistent oatmeal run for a while, and on weekends, I take the time for eggs or fresh fruit topped pancakes. But for the past couple of weeks or so, my breakfasts have consisted of green smoothies. 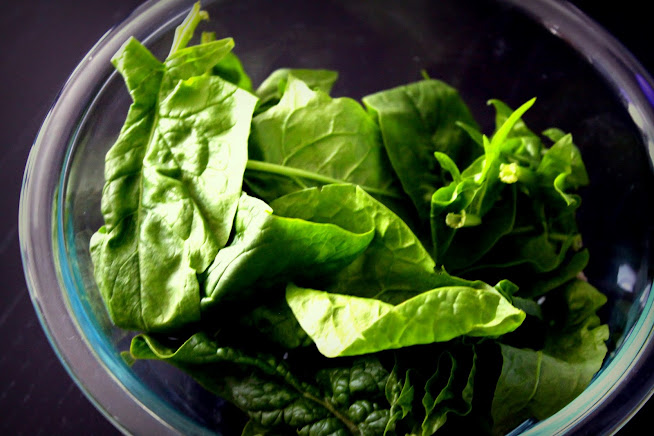 Before you click away in disgust, bear with me for a minute, especially as I tell you that these fruit and vegetable-filled beverages don’t taste anything like spinach. Also of equal importance: they’re filling, as in I can last until lunch without starving.

And unlike some mornings, these drinks provide a healthy source of energy to get me going for the day. If breakfast really is the most important meal, then it makes sense to start with foods that are actually going to have some nutritional value to offer. It’s also much easier to carry around a smoothie than a bowl of oatmeal, as I’m often walking or driving somewhere.

While a green smoothie isn’t a revolutionary concept, I have enjoyed the enhanced version that Katherine Natalia calls a “green thickie” over at greenthickies.com. Personally, that doesn’t sound like the most appetizing of names, so I’ll just stick with a smoothie. But you should really check out the many smoothie combinations she has posted about, as well as other topics like making your own coconut milk and peanut butter.

Her base recipe – which contains spinach (or any other green you like), also includes grains, nuts/seeds, liquid, bananas, and an optional sweetener like dates – is great. It results in a nice blend of flavors and complete proteins. You can then customize with whatever additional flavors you like, as the many suggestions on Natalia’s site suggest.

I like that I can quickly make this either in the morning or the night before. The recipe makes two servings, which means I only need to pull out my immersion blender once every other day, saving half of the smoothie in the fridge for the next morning. If you’re still using a traditional blender, that is fine, of course, but I certainly don’t need an extra multi-pieced dish to wash.

Blend everything together and enjoy. Then check out greenthickies.com for more ideas. Let me know what you’ve tried and recommend.