For “Get Out & Bike” Week we asked the Vital Communities network to submit their favorite hometown bike rides, ideally 10 miles and under. Here are some of the submissions!

Start in downtown Enfield, ride south on Main Street and take a left on Route 4A. Follow Route 4A 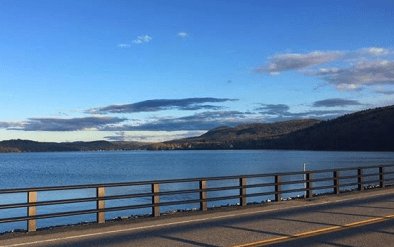 Start in Cornish NH on Route 12A just north of the Windsor/Cornish cover bridge. There is a place to pull over and park. If you prefer, you can park at the boat landing further up the road on the opposite (river) side.

Head North to Plainfield, passing turn off for Saint-Gaudens and Blow-Me-Down Grange. When you get to the town line of Plainfield you will be at 5 miles, and return for 10 miles. You may shorten the route by turning around at any point in the ride. Almost any time of day is good with the wide shoulders, lunch time is a good time during the week, the speed limit zones range from 35 to 50 MPH. Beautiful views of the Connecticut River and Mount Ascutney.

Here’s a great ride that’s under 10 miles, has two options, and works for both experienced and newer riders alike.

Unless you live in Meriden or Plainfield, you’ll need to drive your bikes to the start. There is easy parking at the start. Just come to the Plainfield School on Bonner Road in Meriden. (Bonus tip: There’s a great mountain bike trail that starts from here, too.) 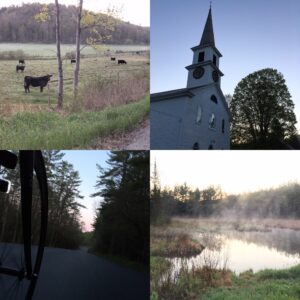 Take a right out of the school back onto Bonner Road. At the stop sign, take a right onto Route 120 South. You’ll only be on Rt. 120 for about 100 feet, as your next turn is another right onto Stage Road. As of May 2020, Stage road received new coat of asphalt, so it is super smooth.  There is some traffic on this road, but visibility for drivers and riders is generally good.

Ride 1.7 miles, then take a left onto Penniman Road (at municipal town sheds). Penniman Road is quieter and winds along past meadows, bogs, and farm fields.

As you ride along, you will cross over the Cornish town line, and Penniman Road becomes Cornish’s Stage Road.  Along the latter half of Penniman and onto Cornish’s Stage Road, you’ll be biking up a few hills that rise gently (for the most part). At the top of the rise in Cornish, you’ll be rewarded with a nice view overlooking farmland and the distant ridge of Corbin Park (aka Blue Mountain Game Reserve). Continuing southward on Stage Road, a swift downhill leads to a long coast into the village of Cornish Flat, and meets up again with Route 120. Riders experienced at riding with fast moving traffic (some sections of Route 120 posted at 50 mph) can head north on Route 120 and back to Bonner Road and the Plainfield School. The pavement and “shoulder” along this section of Route 120 is about as good as it gets…for Rt. 120.

For those wanting a more relaxed ride, just turn around and return the way you came; new views await heading in reverse. No matter if you ride the loop or go out-and-back, the ride is about 9.5 miles. After leaving the Plainfield School, there are only three turns between there and Cornish Flat.

My favorite local mountain biking destination; it has only been open for recreation the last couple of years, and is becoming ever more popular. I like the Dogford Road entrance; starting from there, take the right fork onto the porcupine trail, which will eventually bring you to a major intersection with Knapp road. From here I like to head north on Knapp and do the Paige Hill loop, bringing you 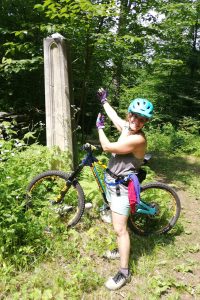 back to the same intersection, but this time head across and let it go for a grassy and scenic downhill, which will eventually bring you to the Stone Hill loop. Right now only the southern trail is open, due to extensive recent logging, but no complaints, it is a delightful woods single track that pops out into an open slope with a sinuous dirt track. At the bottom, take a left on the 1772 trail to Mason’s four corners and follow that to the Mason trail and Poor Farm back to parking. Its is very important to observe the rules here, i.e. no unleashed dog, in order to maintain recreational access. I particularly like that every time I go here, I see a hunter, hikers, birdwatchers, runners, and mountain bikers in roughly equally proportions. Also, great views to Mount Ascutney and beyond. 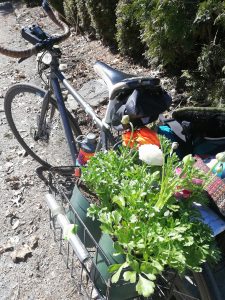 Starting anywhere in Hanover, the route starts at the turn off 120 onto Greensboro Road (note this light does not change for cyclists, unlike the ones in town). Head out to Hanover Center Road, and from there to the first left on Dogford Road, which you follow in a clockwise direction to make a loop back to Hanover Center and then to the start. Most of the 15 mile ride is a gentle undulating uphill, meaning you don’t realize how much elevation is sneaking in. Lovely views here and there, nice gardens and flowers, a couple farms, as well as the Hanover Center parade grounds and “downtown” Etna. Very popular with bikers, and although there can be a moderate amount of car traffic, it tends to share the road quite politely if you return the favor.

Start from Hartland Three Corners (Damon Hall) down Route 5, across I-91, past the brewery and Artisans Park, down into Windsor. Turn left in front of the Armory and cross the amazingly long covered bridge to New Hampshire, then return. The ride is only 8.2 miles if you start from the Hartland park and ride at Exit 9 on I-91.

Start in downtown Hartland, go up the Hartland Quechee Road to Clay Hill Road, then turn right and follow Clay Hill to Route 5. Turn right on Route 5 S and bike back to downtown. There are rolling hills, the cars are driving fast on parts of it, so this is a great ride for experienced road cyclists, first thing in the morning on a weekend, when there are no commuters or dump runs.

The Mascoma River Greenway is a paved multi-use path from downtown Lebanon extending along the old railroad bed toward West Lebanon. It crosses the Mascoma River several times and goes through open and forested areas. It’s often busy, especially on nice days, so please follow appropriate physical distancing measures. You can access the trail at several locations:

The Northern Rail Trail spans 57.6 miles from Lebanon to Boscawen. It’s a wide gravel multi-use path, and like the Mascoma River Greenway, it can be busy especially on nice days, so please follow appropriate physical distancing measures. You can access the trail from near the CCBA in Lebanon and by Mascoma Lake in Enfield.

From downtown Lebanon, head east on the Northern Rail to Bank Street Extension. Turn left on Bank Street Extension, follow road uphill. Cross under interstate and keep climbing Hardy Hill all the way to Sunset Rock Road. Turn right on Sunset Rock and follow it all the way down to its end at Route 4. Turn right on Route 4 (wide shoulder here), then right at Mill Road where you can hop on the rail trail and head west back into town.

PLAINFIELD: River Road (up to 14 miles)

River Road is a quiet and scenic local road that runs along the Connecticut River. The road is mostly flat with a few short hills. The road can be ridden as an out-and-back (up to 6 miles one way) or as part of 14-mile loop using NH Route 12A. Route 12A is popular with more experienced cyclists, while families will likely want to stick to River Road. There are no formal parking areas on River Road, but there are some informal pull-offs. Please respect local traffic regulations and landowners when parking.

This route combines paved and unpaved roads, but the steep stretches are mostly paved, which helps a lot! Start at the Strafford Green (and admire the Town House, one of Vermont’s most photographed buildings!). Take the Brook Road, which climbs steeply at first and then levels out. Take a left onto the Cross Road and ride until its junction with 132. Go left and climb a bit then ride a long descent into South Strafford. At the T, go left on Justin Morrill Highway (or go right if you want to get a snack from Coburns’ General Store), and ride back to the Strafford Green. On really warm days, you might want to take a footpath along the river to this bridge over a swimming hole. The water stays cool all summer.