Getting Around: A Non-Driver Perspective

We northern New Englanders drive more per capita than most other Americans, and transportation is our biggest producer of greenhouse gases. So it’s great when people find ways of getting around the Upper Valley that don’t involve driving by themselves. Bikes, e-bikes, buses, carpools – what’s your transportation story? Here’s one:

Hilde Baert is an e-bike user who relies on it as her main form of transportation. As her travels take her around the Lebanon area she has become familiar with charging locations, navigating the greenway, and meeting the challenges of bike travel. Here she talks about her commute in her own words. This interview has been edited for clarity. 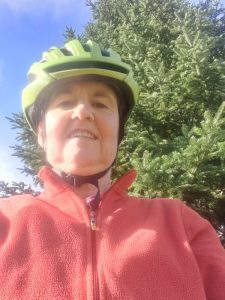 I am so lucky I live near the Lebanon Green in Lebanon, NH. I am 60 years old and I don’t drive (yet). I haven’t given up hope entirely that one day, I’ll be able to get a driver’s license. However, for all practical purposes, I don’t drive a car. Nevertheless, since I turned 59, I started riding my e-bike almost daily, even in winter (for trips to the store in Lebanon).

This e-bike has expanded my horizons greatly. When it is not winter, I bike to work at Visions for Creative Housing Solutions, a communal housing project for adults with developmental disorders (Visions has two locations, one in Enfield, NH and the second in Lebanon, NH). I work part-time at both locations. Twice a week, I bike to Visions in Enfield, located near the Enfield Dump. During the winter, a colleague gives me a ride. I charge my bike at work in Enfield. They have solar panels.

I ride my bike for shopping locally, even in the West Lebanon Mall, which is connected to the Mascoma River Greenway (part of the Northern Rail Trail that runs from the center of Lebanon to West Lebanon) by way of Glenn Rd (the Powerhouse Mall).

What is helpful to me is a man with muscles and a pickup truck who can help me out when I have a flat tire. I happened to have a flat rear tire on Mt. Support Rd., on the way back from my volunteer shift at DHMC in Lebanon, NH. I met such a man who lifted my bike on his flatbed and gave me a ride to Omer and Bob’s bike shop, near the Lebanon Green. 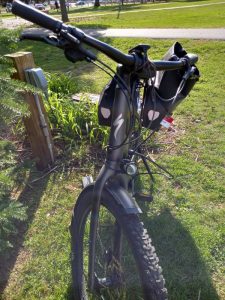 Recently, I discovered there were electric outlets on the Lebanon Green. I tried charging my bike there, and it worked! I hope there will be more charging points in the communities of the Upper Valley. We could have cafes, hot dog and lemonade stands near communal electric charging points, just like the old inns that served postilions.

Downtown Lebanon is a good place for walkers and bikers: We have public transportation, the Opera House, Ava Gallery, the CCBA, churches, restaurants and stores in the center of town. Recent positive changes in Lebanon are:

Ultimately,  what we really need – in my view, as a person without car – to make this town even more friendly to pedestrians, wheelchair or electric chair users, is a local grocery store or market. I am thinking of the residents and staff of Visions on Green St and Roger’s House, near City Hall. I do hope a replacement for the now-defunct Village Market will come and that more voices will join in the conversation.

This interview is part of our Getting Around transportation series, where we interview individuals who are seeking alternatives to driving by themselves. If you would like to share your story, please reach out by emailing Leona.