Getting Around: Taking a New Bus Line

We northern New Englanders drive more per capita than most other Americans, and transportation is our biggest producer of greenhouse gases. So it’s great when people find ways of getting around the Upper Valley that don’t involve driving by themselves. Bikes, e-bikes, buses, carpools – what’s your transportation story? Here’s one: 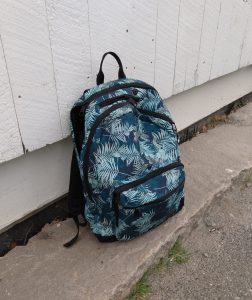 Vital Communities Staff Member Becky Bailey offers this firsthand account of using a relatively new bus service for some of her commutes.

I can’t take the bus every day I go to work. At least one day a week  I need my car to do shopping or errands I can’t do on foot or by Advance Transit. This morning, however, is one of those when I can. I’ll drive seven miles round-trip instead of 48, saving money and greenhouse gas emissions. I’ll get a little walk that I wouldn’t get if I drove. And I’ll take advantage of a free and greatly underused community resource.

When it merged into Tri-Valley Transit in 2017, Stageoach Transportation had provided transportation in the Upper Valley since 1976, having been started by community leaders who recognized that many residents were impeded by a lack of reliable transportation to work, medical appointments, and essential errands. In the early days, services focused on elderly residents and were provided by volunteers. Over the years, buses were introduced, serving major Upper Valley commute routes along Interstates 89 and 91. Since the beginning of the pandemic, all Tri-Valley buses have been fare-free.

As a Strafford, VT, resident, however, I had to go to either Sharon or Thetford, VT, to catch a bus to the White River/Lebanon/Hanover core where I work. That changed in 2020 when Tri-Valley added a spur line connecting the Thetford and Sharon Park and Ride lots as part of a route expansion to help area high-school students get to the school of their choice. This means a bus stops in South Strafford at 7:48 am, Monday through Friday, landing in Sharon at 8 am for a bus that gets to White River Junction at 8:15. Even though school’s out for the summer, Tri-Valley continues to run the Thetford Connector and Chelsea spur lines.

For me, that means a bus stops an easy 3.5 miles from my home instead of a treacherously hilly 10 miles. I can even e-bike to the pick-up location and lock my bike in a nearby bike stand. Today, however, I’m running late and it looks like rain, so I take my car for the first leg. 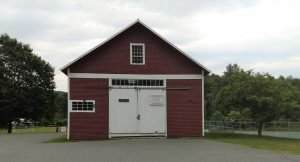 Whether I go by bike or car to the bus stop, I prepare for bus travel by putting my belongings in a backpack and wearing comfortable shoes for the walk to my office. And I pack an umbrella. Unlike Advance Transit, Tri-Valley doesn’t have bus shelters at most locations, so you need to be prepared.

Sure enough, a light sprinkle begins while I wait by the Red Barn in South Strafford for the Thetford Connector. The bus pulls up right on time, driven by Ron Benson, a South Royalton resident who has driven for Tri-Valley for nine years. I’ve never experienced a delay on this line, but were the bus running late, Ron would ask if I were transferring to another bus and would radio that bus and ask the driver to wait. These are not the mean streets of some dog-eat-dog metropolis. These drivers make sure you’re not stranded.

After a hilly, twisty ride over 132 to Sharon, the bus pulls into the Sharon Park and Ride and I hop on the bus to White River Junction. Driver George Otis, a Brandonville resident who began driving for Tri-Valley four months ago, asks me where in White River I’m going. He has extra time in his schedule and I’m his only rider, so he can drop me right across from my workplace instead of a half-mile away at the White River VA Medical Center. Coulda worn those five-inch heels after all! 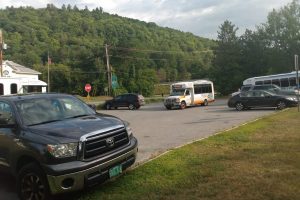 Were more people taking advantage of this great public resource, George wouldn’t be able to custom-deliver me to my office, but I’d gladly accept that inconvenience. I hope people load the Tri-Valley routes and leave their cars at home more often – to save money, carbon, and traffic congestion, and to vote with their feet to support this responsive, reliable public resource.

This interview is part of our Getting Around transportation series, where we interview individuals who are seeking alternatives to driving by themselves. If you would like to share your story, please reach out by emailing Leona.