I’m happy to announce that we have a new Quest! With the help of Mr. Butler’s 3rd & 4th grade class at the Albert Bridge School, there is a new Quest in Brownsville, VT. The Daniel Cady Quest takes you from the Albert Bridge School up to Daniel Cady’s mausoleum. Cady was a poet who dedicated many of his works to describe life in Vermont. When he died in 1934, he had already made arrangements for his casket to rest in the mausoleum at the top of the hill. Originally, the mausoleum would have looked out at the top of Ascutney, but many trees grew in and the view isn’t as clear.

The Albert Bridge students learned about the life of Daniel Cady with the help of the Brownsville Historical Society and then completed their teaching clues. We took the kids up to the mausoleum and then helped them create their movement clues. After putting the two parts together, we went back to the school to test their new Quest!

When we got to the mausoleum, we stumbled upon a filmmaker with Vermont novelist, Joseph Citro. Specifically, Citro works with ghost stories in New England — how fitting to find him by the mausoleum! 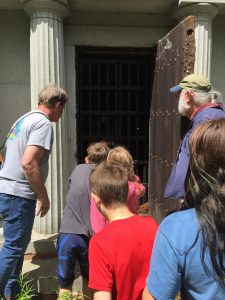 Looking into the mausoleum

This was quite lucky for us, as he had the key to open the mausoleum. He was able to take the lock off of the main wooden door. There were still bars that prevented us from entering, but we were able to look inside the mausoleum and see his casket. This was an amazing addition to what we thought would be a relatively straight forward Quest check. We hid the box for Questers to find and headed back down.

This new Brownsville Quest is live! Be sure to give it a try. If you’re in Brownsville, check out The Quest for the Kestrel, a Quest on the Super Quest list in the area. If you haven’t signed up for the Super Quest you can find out more information and register your team here

Interested in adopting this box and becoming a box monitor? Check out this page for more information on volunteering for this box or any other boxes without monitors!

Additional thanks go out to Alice Stewart and Rise VT for their generous support of this project!