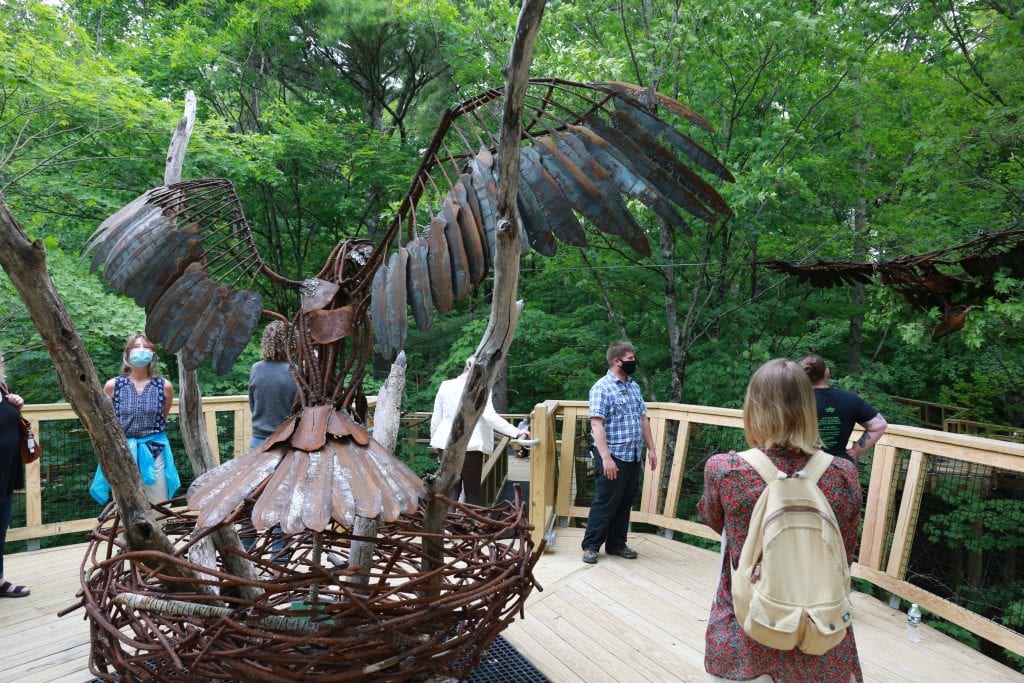 Explore the Vermont Insitute of Natural Science and solve a riddle in the process!

The VINS Nature Center is located on Route 4 in Quechee VT, just west of the Quechee Gorge. You will be greeted with a statue of a flying eagle and you know you have arrived. Your Quest begins at the Nature Store.

Click here to view/print the clues and map for this quest.

While following this quest find signs along the way. These letters are a clue to a riddle this day. Follow the course and make sure to stay true; the only one who can find the answer is you.

Leave the nature store; you’re on your way.

Have you tested your wings on “Flap” today?

Which could represent the flight of a vulture.

Your questing adventure is sure to delight!

Find the fifth letter of the last name of the man honored on this stone. ____

Bear right at the fork, down the path from the stone,

There are more than just birds that are accident prone.

These are animals that creep on the ground,

And instead of feathers their scales abound!

Look at the critters but only for a bit,

Bear right for a map when you get to the split.

Find the second to last letter of the biggest (by height) lettered word on the map. ____

A classroom outdoors is just out of sight.

You’re now in the forest, you won’t be alone,

Here is the place where the animals roam.

Woodland species: the large and the small,

Find food and shelter under trees so tall.

Find the second letter of the second word of the long-eared animal that prefers early-successional  forests. ____

Find the first letter of the largest animal that prefers well-established forests. ____

Move along the path, down and around,

Until you see a walk that is high off the ground.

You’ll hear the river over to your right,

The gleaming water is just in your sight.

This river is older than all that you see,

It was carved as a glacier melted with speed.

Stay on the path, the walk now overhead,

There is green all about in the summer it’s said.

Look for the plants that blanket the ground,

They were here when dinosaurs were around.

Bumps may cover the underside of their leaves,

These spores create more of these ferns under trees.

Find the fourth letter of the second word of the blue fruit pictured. ____

As you keep walking, spy some blue on a tree,

Downhill to the river is where you will find,

Evidence of where a beaver has dined.

Many maples guide your way down the trail,

When you find a stone bench go ahead, rest your tail!

Find the first letter of the first word at the top of the stone bench. ____

Continue on walking; you’re now in the zone,

Where forest and wetland become ecotone.

Together they meet in fashion quite grand,

And make homes for animals in water and land.

The songs of blackbirds ring out in a spree,

The call they sing out is “Conk-La-Reeeee!”

Find the second letter of the title of the sign with pictures of two native wetland plants. ___

Find the third letter of the second word of the name of one of the noninvasive woody plants found in riparian areas. ____

Up the steps to a platform in the trees,

Look down to water full of cattails and reeds.

From fish and frogs to turtles that roam.

And you could even see an otter swim by!

Stay on the green path. Up the hill you now go,

Among the tall trees. Oh my, how they grow!

Further along there’s a wall made of stone,

Take the path to the right where large trees have grown.

Find the third letter of the word that means dead standing trees. ____

Stroll through the woods ‘til on the hill high,

Where below lies a pool with no fish to fry.

The water is magic though not what it seems,

The water is not from a lake or a stream.

Water pools here after the ice and the snow,

A place for amphibians to mate and to grow.

Find the first letter of the word after dragonfly, meaning that it is in a younger stage of life and not an adult. ____

Travel along, the journey’s almost done,

Take a left at the map. Hasn’t this been fun?

The box which you seek is hidden quite near,

An eagle Americans find quite dear.

Enjoy your visit and come back someday!

A bird that travels far and wide,

South it goes to Panama in stride.

The wings of this bird are wide to be sure,

To catch the wind of the sky once more.

Unscramble your letters in order to see,

The bird on VINS logo that is flying free!