Getting Around: The Challenges of Walkability

To celebrate “Walktober” Vital Communities has been exploring walkability in our Getting Around  series. In a previous entry, “The Joys of Walkability,” VC transportation staffer John Haffner discussed getting to know his new home of White River Junction by walking. In this entry, John explores some of the barriers facing pedestrian transportation planning and what communities can do to respond to them. 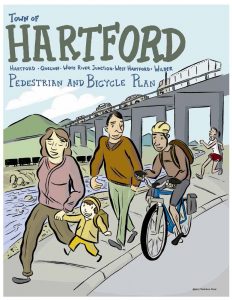 A flâneur-friendly vision for Hartford

In the first of our Walktober “Getting Around” posts I introduced the concept of the “desire path.” This is a well-worn pedestrian path in spite of no formal infrastructure designating it as a walkway. One of the curious things about desire paths is that they exist in the first place. Why does our formal pedestrian infrastructure not just naturally follow the clear lines of where people need to go? This is in part because human beings’ mobility patterns and the places that we travel to are not static. Where we need to go changes as our lives change, and our built environment changes alongside it.

Infrastructure does not respond well to these kinds of dynamic mobility needs, however. Transportation planning is notoriously sclerotic. It can take decades to plan, approve, and execute a sidewalk or a roadway. The most thoughtful transportation planners know their communities, seek out public input, and maybe even pay attention to existing desire paths during this extended process of planning and executing infrastructure projects.

To gain better insight into Hartford’s pedestrian planning process, I spoke to Matt Osborn, a Senior Planner for the town, about some of the barriers facing pedestrian infrastructure planning.

As is often the case with infrastructure projects, one of the main barriers is funding. “Sidewalks are expensive.” says Osborn. “We’ve been successful getting grants, but Hartford needs to step it up,” he added, referring to the town lacking much of a budget for sidewalks outside of matching funds for state and federal grants.

With a limited budget, Hartford has been successful in leveraging state and federal funding. But these grants take time to get. The town’s 2009 bike/pedestrian plan laid out roughly 30 projects that they are still chipping away at. This past year was a big step forwards, however, as the Town received a grant from VTrans to add bike and pedestrian infrastructure to N. Hartland Rd. between Arboretum Lane and Ballardvale Drive. This project is part of a 20+- year plan to create a truly “multi-modal” (fostering diverse modes of transportation)  corridor from Rt 5 through Sykes Mountain Ave. to downtown White River Junction.

Funding is only one barrier, however. There is also the logistics of navigating the many jurisdictions that control infrastructure. In Hartford, VTrans manages U.S. Routes 4 and 5 and Vermont State Route 14 (along with I-89 and I-91). This means that bike and pedestrian projects along these routes need to coordinate closely with VTrans’ plans for these corridors.

Alongside these difficult yet relatively straightforward challenges of funding and logistics is the comparatively irksome challenge of shifting the culture of our transportation system to prioritize bike and pedestrian infrastructure. The other posts in Getting Around give examples of Upper Valley neighbors who making that shift themselves, one by one.

Moreover, the bike and pedestrian infrastructure we do have is captured by the sensibilities of roadways – that is, they are designed for speed and efficiency. While a sidewalk may occasionally make way for idleness and leisure in the form of chalk art or socially-distanced outdoor dining, sidewalks generally offer the minimum space needed to allow pedestrians to move from point A to point B. 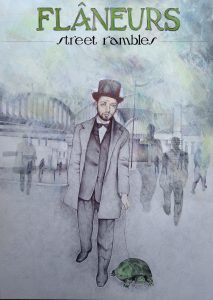 But there’s more to walking than purposefully moving from one place to another. An alternative expression is that of the flâneur – a somewhat wandering dilettante with no expressed area of interest or expertise. The image of the flâneur emerged as a literary archetype of French poets reacting to a rapidly modernizing Paris in the mid-19th Century. During this time, the city’s narrow streets were turned to wide boulevards to make way for carriage and eventually automobile traffic. The flâneur maneuvered through these new streets with ambivalence and amusement, offering a romantic critique to the trappings of the modern world.

It was the philosopher Walter Benjamin that brought the description of the flâneur to the 20th century when he described the “intoxication” experienced by the aimless walker. “With each step,the walk takes on greater momentum,” Benjamin describes, “ever more irresistible the magnetism of the next streetcorner.”

As I read Benjamin’s further descriptions of the flâneur’s journey as “precipitous” and leading ever-downward “through vanished time,” it brings to mind an eerie mood well-suited for an aimless October walk. I hope all of you humble pedestrians take the time to slow your stroll this month and practice some flânerie in one of your favorite Upper Valley haunts. I for one am looking forward to participating in my first Gory Daze Parade in downtown White River Junction on Saturday, October 29.

This interview is part of our Getting Around transportation series, where we hear from individuals who are seeking alternatives to driving by themselves. If you would like to share your story, please reach out by emailing Leona.