The Next Generation of Questers in Charlestown

The best part about Valley Quest is how excited people get when they go on a Quest.

Until last week, the only Quests I had been on were with my dog. Don’t get me wrong, my dog is wonderful, but doing a Quest with kids is a totally new and great experience.

On a recent afternoon, two of my nieces and I decided to conquer the SCA Quest in Charlestown, New Hampshire.

SCA is the Student Conservation Association, which aims to connect young people to the environment and environmental stewardship through hands-on learning. The campus is beautiful and is surrounded by fields, the Connecticut River, and historical Charlestown.

The Quest itself wasn’t difficult, but being able to follow directions that are phrased as riddles correctly can certainly be a challenge. But it was a challenge we were all up for.

What was amazing was how enthusiastic my nieces were before, during, and after our Quest. My youngest niece even said, “This is better than the water park!”—and nothing says “enthusiastic” quite like that.

I had told the girls about the stamps that are located in the Valley Quest boxes that you use to stamp your Valley Quest book when you have finished the quest. I was the only one in the group with the actual Valley Quest book, and so that they would be able to keep their stamps even after the Quest, they made their own “Book of Stamps 2016.”Towards the end of the Quest, we had decidedly gotten lost. What happened was this: we got so excited to find the box that we skipped a few of the directions and got ourselves completely turned around. But because of that, we got to backtrack a little and my nieces learned a valuable lesson in working together.

We broke down every clue to try and understand exactly what each one meant. Did the “sliver of sky” mean the field? Could the archway be made from trees, people, or an actual cave?

Without giving too much about the Quest away, we eventually found our way to where the treasure was hidden—the very last clue. At this point, everyone put away the clues and decided to try and find the box themselves. But the clues are important, because we didn’t find the box until we decided to pick my phone back up and read the last clue over again (you become a beta tester on our new iPhone app by emailing Sara Cottingham).

But finding the treasure wasn’t even the super exciting part. The best part was trying to figure out how to get there in the first place. I let my nieces take charge of this Quest, leading me where they thought we should go. Their enthusiasm and determination to get there made me want to do more quests with them. Going out on a Quest with someone who is really excited to be Questing makes the experience even better than it already is.

We each signed the book located in the Valley Quest box, and both of my nieces asked if they could go on every Quest there was. It might take a while, because there are over 200 Quests throughout the Upper Valley, but I think they could do it.

Join me as I complete the Super Quest and do more quests with my favorite Questing partners. And don’t just read about my quests, take your kids, your dog, or yourself, and start Questing!

Some photos from the trail: 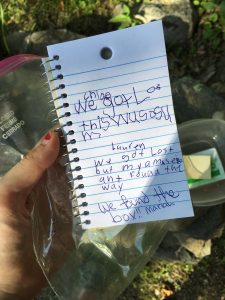 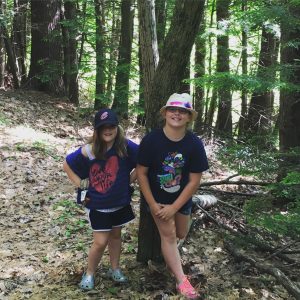 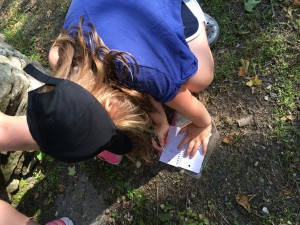