Around 150 students participated in Hartford Memorial Middle School’s first Bike & Walk to School Day on May 6. Organized by Vital Communities, the event had school staff, parents, the Hartford Police Department, and Vital Communities staff stationed along Route 5 as kids got to school alert and energized. Thanks to the Bike Hub of Norwich for sponsoring the event and providing bike tune-ups at the Dothan Brook path. Contact us if you’re interested in organizing bike and walk events for your school! 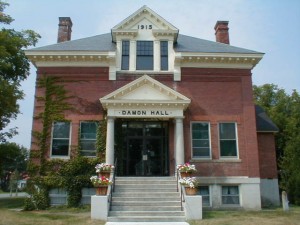 We launched our second round this spring, with the towns of Hartland, Sharon, and Royalton. Survey results are in for Smart Commute Hartland!

Some key findings from the survey are:

(1) Hartland residents want to use the internet to organize carpools, but many are unfamiliar with Go! Vermont, an easy-to-use tool for matching rides,

(3) Most Hartland residents have never ridden The Current bus, but many are eager to learn more about it. You can even use Google Transit to plan a trip on The Current.

Check out the full survey results!

Stay tuned for survey results from Sharon and Royalton. Have a project idea for one of the towns? Let us know at uvtma@vitalcommunities.org.

Resource Systems Group’s Eric Talbot rides his bike to work approximately 4 out of 5 days a week over the year. In the winter, when the weather is too harsh, Eric walks to work or rides the Green line on Advance Transit to White River Junction. Eric lives about a mile and a half from his office. His main motivations for riding his bike to work are that cars are expensive to own and maintain and he gets great exercise, especially going up a challenging hill on the way home.
Eric finds that most drivers are polite and accommodating to him on his commute. Even on roads without much shoulder, he has not had any problems. Eric mentioned a couple of benefits to working at RSG that help him commute to work on his bike: availability of shower on site and the ability to adjust his hours when the days get short to ride to work and home in the daylight

In 2013, Smart Commute recognized the Lebanon School District as the small workplace of the year for its Safe Routes to School program, the use of bio-diesel in school buses, and a commuter incentive club for school staff. The district has also completed a district-wide inventory of bike amenities, installed bike racks where needed, and set up bike repair kits at major locations. High school students are now required to pay for parking as an incentive for them to find other ways to get to school.

A special award was presented to David Palmer, who retired this year from Stagecoach Transportation Services after more than 30 years of service to central Vermont.

“Our annual awards are one of the most rewarding parts of my job. It’s heartening to see that our region is building a culture around efficient transportation options and making real progress toward sustainability,” said Aaron Brown, transportation program manager at Vital Communities, which oversees the TMA. “We’re especially pleased to honor David Palmer, who turned a very difficult proposition – the building of a public transportation system in rural central Vermont – into a service that has helped thousands of local residents get to work, medical appointments, and other destinations efficiently and affordably.”

King Arthur Flour was honored as Workplace of the Year for its electric vehicle charging stations, internal bike-share program, participation in the Way to Go commuter challenge, and preferential carpool parking. Dartmouth Coach was honored for Project of the Year in recognition of its new service to New York City. The Commuters of the Year are Hypertherm vanpool drivers Bill Goggin and Dave Churchill.

The Upper Valley TMA is a program of Vital Communities that works to reduce reliance on driving alone. The TMA’s members include local municipalities, transit agencies, major employers, and three regional planning commissions.

Do you know an Upper Valley resident, group, or project worthy of recognition for their promotion of biking, walking, carpooling, or riding the bus? Vital Communities is seeking nominations for Commuter of the Year, Workplace of the Year, and Project of the Year in the Upper Valley TMA’s annual transportation awards. The deadline has been extended to June 16, so make your nominations today!

Commuter of the Year: Do you know someone who avoids driving alone and serves as a model for the community? Previous winners are Joe Broemel (transit rider, Dartmouth College) and David Conant (electric-assist bike commuter, Kendal at Hanover). Download the Commuter of the Year Nomination Form.

Workplace of the Year: Does your workplace, or one you know, do a great job supporting our local transportation system? Previous winners are Hypertherm, Dartmouth College, and the Lebanon School District. Download the Workplace of the Year Nomination Form.

Project of the Year: Was a project completed this year that will make it easier for you to leave your car at home and get around some other way? Our previous winners are the Hanover Mobility Hub and the City of Lebanon’s bicycle-pedestrian improvements. Download the Project of the Year Nomination Form.

Vital Communities has announced it will partner with the towns of Bradford, Hartford, Norwich, and Windsor, Vermont, to launch a new version of its successful Smart Commute program this spring: Smart Commute Home Edition. The new initiative will help towns develop programs and promotional campaigns to encourage commuters to drive alone less.

“Upper Valley commuters have collectively saved millions of dollars each year thanks to new carpooling, transit, cycling, and walking initiatives that we’ve worked with major employers to develop,” says Transportation Program Manager Aaron Brown. “We’re excited to see what additional savings can occur when we partner with towns to help their residents at the starting point of their commutes.”

In addition to receiving consultation from Vital Communities on new transportation programs, the towns selected for Smart Commute Home Edition will receive a $500 community grant from the Vermont Agency of Transportation’s Go! Vermont program. Ross MacDonald, manager of the Go Vermont program, says “Vital Communities has a strong history of successfully moving the Upper Valley toward a more sustainable transportation future. VTrans is excited to partner with them and four towns to promote smart commuting options.” Vital Communities received additional support for the project from the Canaday Family Foundation.

“During the last twenty years, Downtown White River Junction has been experiencing an economic resurgence. However, there is limited land area and parking in the downtown,” says Hartford Town Planner Matt Osborn. “As a result, transportation demand management is an important part of continued revitalization and a solution to avoid a future parking problem. This fits in with the vision of the Smart Commute Home Edition program.”

Several chosen towns also highlight how Smart Commute Home Edition can help their efforts to write new town master plans. Bradford Planning Commission Chair Justin Klarich says, “We are in the midst of updating the Town Plan, and I can whole heartedly say that a survey would most definitely be valuable information in this update. Any information could help forge recommendations and even town policy statements in our Town Plan that could in turn be used for grant proposals.”

Hypertherm has rolled out some new benefits this January for smart commuting. Employees who drive a carpool, walk, or bike will receive $5 a day and carpool passengers will get $2.50. Along with the monetary incentive, carpools have designated preferred parking spots. For those who take public transit to work, Hypertherm will give employees free tokens to pay for their ride.

If it is time to replace a vehicle, Hypertherm will reimburse current associates $500 for the purchase or lease of a new or used, hybrid or conventional auto that gets 40mpg or better.

There are more reasons than ever for Hypertherm employees to branch out and try new ways of getting to and from work each day. They can save money and earn money!

Smart Commute participants Sally McEwen and Anne D’Avenni of Mascoma Savings Bank both walk to work in Lebanon. Anne walks two or three times a week and it is about a mile round trip for her. Sally has been walking to work since she joined the bank in 1969. She has about a mile and half round trip. Both Sally and Anne supplement their morning walk with a brisk lunch time walk on the rail trail or around town. Mascoma Savings Bank joined the Smart Commute Project to encourage other employees to choose a healthy, affordable commute. The bank continues to encourage healthy lifestyles and going green with the development of a wellness committee. There has been a shift from driving alone to walking. Many employees share fitness classes and walk on breaks and lunches.

Terri and Brenda from Mascoma Savings Bank have been carpooling for the last 3 years – motivated by the ever increasing gas prices and a 50+ mile roundtrip commute from Sunapee to White River Junction. Originally there were two of them who both lived in Sunapee and worked at Mascoma Savings Bank. As winter approached, Terri and her colleague had another employee ask to join their carpool. The three of them commuted through the winter. Terri and Brenda continue to carpool, and it has worked out very well for the both of them. “We carpool about 90% of the time,” Terri says, “and it has worked out well.  In addition to saving money on gas & wear and tear on our vehicles – we enjoy having company on the commute and it makes the time go by more quickly”.