Vital Communities’s Valley Quests allow you to undertake self-guided explorations of more than 160 special places throughout the Upper Valley. But it can also be great to have an expert guide from time to time! That’s why we regularly arrange Guided Quests – always free of charge – led by people with special knowledge of a place.

This fall, we’ve arranged two Guided Quests, both of sites that are part of Super Quest 2021: Climate Connections. You can enjoy these as one-off events OR add them to your SuperQuest tally! What? You haven’t started the SuperQuest? There’s still time! You have until November 1 to finish, and fall is a fantastic time for Questing!

The two Guided Quests this fall are: 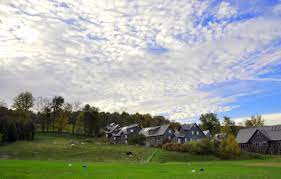 While you tour an innovative housing/farming planned community, learn about a beloved Upper Valley community member who was also one of the most influential environmental thinkers of the twentieth century. After receiving a PhD in biophysics from Harvard, Donella Meadows joined a team at MIT applying the relatively new tools of system dynamics to global problems. For 16 years Donella wrote a weekly syndicated column called “The Global Citizen,” commenting on world events from a systems point of view. It appeared in more than twenty newspapers, won second place in the 1985 Champion-Tuck national competition for outstanding journalism in the fields of business and economics, received the Walter C. Paine Science Education Award in 1990, and was nominated for a Pulitzer Prize in 1999. In 1995, she put out a vision of “an intentional community of people who want to explore the challenge of Right Livelihood-living and making a living in ways that are materially sufficient, socially and ecologically responsible, humanly rewarding, satisfying to the soul….[pursuing] the central values of sustainability, sufficiency, community, equity, service, [and] efficiency.” Based on this vision, Cobb Hill Cohousing was born. Join Cobb Hill resident and Quest designer Sandy Gmur on this guided Quest that will take you on a hike to see some of the features of this community and how they are working towards living in harmony with nature and stewarding the earth. 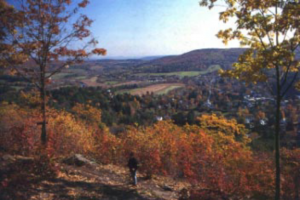 Rangers at this national historic site lead this exploration of forest sustainability and the legacy of one of the 19th century’s pioneer environmentalists, George Perkins Marsh. As the only park in the National Park System focused on telling the story of conservation history, Marsh-Billings-Rockefeller National Historical Park is working hard to ensure that all aspects of its current operations are contributing to a healthier and more sustainable Park. The Sustainability Quest will lead you on a personal tour of the highlights of the Park’s sustainability program, starting at the Forest Center and heading out onto nearby trails. As you walk, rhyming clues will guide you across the landscape and toward a hidden treasure box. In the treasure box you will find a logbook to sign your name, where you are from, the date and record any thoughts you would like to share (and maybe even a sketch or a little poem!). You will also be able to collect an impression of the hand-carved rubber stamp when you complete the Quest.