Planning for the Future in Newbury

We ended the school year with various classes “adopting” raised “laboratory” beds, perennial, and permaculture gardens around the school.  Within these we have a team of students that planted a garden committed to serving our salad bar and lunch programs, another few classes creating food for storage for cooking/baking projects,  a class that planted a butterfly garden- with an off-site milkweed patch to promote monarch habitat, and yet another team of classes planted a “stone soup” garden.  We received funding for a staff member to tend the gardens over the summer months- always a hiccup in the process of gardening at school.  Over time, our school has become increasingly committed to using farm to school curricula to support student learning and engagement.  We also purchased a beautiful new greenhouse kit and will put together a group of staff and community members to erect it so it can begin to be used once school is back in session.

Finally, we’re really excited that we’re sending a team consisting of administrator, parent, chef, and teachers to the three-day Farm to School Institute at Shelburne Farms!  After completing two farm to school grants, our team is poised to create a plan that will allow our program to continue to grow and become sustainable.  We feel very fortunate!

In the winter of 2015-2016 it was brought to my attention that Canaan Elementary School would support the creation of a food garden. I was allowed to work with second and fourth graders to create this garden so that they could learn (first hand) how to plan a garden, use organic methods, and enjoy the fruits (and vegetables) of their labor. Another goal was to educate them on making healthy food choices.

The students began planting seeds indoors in early March under grow lights. They tended the seedlings throughout the spring, planned how to build the raised beds, set cardboard down on the walkways, mulched the walkways, built the raised beds, filled them with compost and soil, transplanted seedlings, and sowed seeds directly. They learned that straw mulch retains soil moisture and mulched the beds as well. They have been weeding, watering, observing, and even harvesting some salad greens. Students made sketches about how to direct rain water from our outdoor classroom roof (which is next to the garden) into a water collection barrel. The rain collection system is currently under construction.

Our school will host a summer recreation program and the staff has agreed to have the students tend the garden throughout the summer. Each day the cafeteria will prepare two meals and include what the children harvest.

Students have been very enthusiastic about this project and have enjoyed accomplishing a lot of work in a short time.

Tunbridge Central School students spent time in May and June exploring foods through snack-time taste tests, thanks to a mini-grant from Vital Communities. Three different classrooms prepared recipes to share with the rest of the school, with hopes that popular recipes will be included in next fall’s hot lunch menu. Two of the recipes included featured Harvest of the Month ingredients – carrots and herbs.

Mrs. Hook’s first and second grade students prepared an apple-carrot salad with raisins, Greek yogurt dressing and cinnamon. In three stations, students peeled and diced apples, chopped carrots and celery, and measured and mixed the dressing. Finally, they shared their creation with TCS students during morning snack. More than 60% of students “liked” the salad, less than 20% “disliked” it, and nearly 20% didn’t participate in the taste test (including students who were absent or who didn’t try the salad).

The next taste test was by far the most popular!  Outside on a hot spring day, most students LOVED the strawberry-rhubarb popsicles made for them by the “Physical Geeks” – a TCS middle school teacher advisory (TA). Using fresh local rhubarb, stewed with sugar, and mixed with diced strawberries, strawberry yogurt, orange juice and applesauce, the “PG’s” created a culinary delight that many students were still talking about on the last day of school. More than 80% of TCS students enjoyed the popsicles!

Finally, just a few days before the end of school, the TCS fourth grade prepared a cucumber-mint salad for trying at both TCS and at Trek to Taste in Woodstock. While not as popular as the first two recipes with TCS students (approximately half of students who tried it liked it), it was enjoyed by most who tried it at Trek to Taste, with comments such as, “the spices all blend together well – delish!” 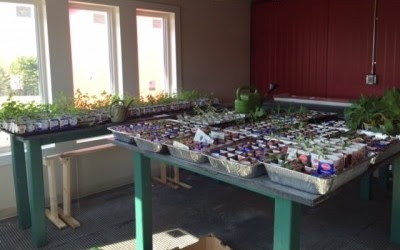 This Spring our Farm-to-School Mini-Grant allowed us to get creative and local with cooking in our Forest Kindergarten outdoor classroom. We headed out into the woods each week with our new grate and grill/griddle to play and learn with local foods and cooking in the outdoors. Over the past months, students have cooked pancakes, bacon and eggs, stick bread with pesto, taste tested spring veggies, and frequently enjoyed Hurricane Flats popcorn all thanks to funding from the grant! – Eliza Minnucci – Forest Kindergarten Coordinator, Ottauquechee School, Quechee, VT 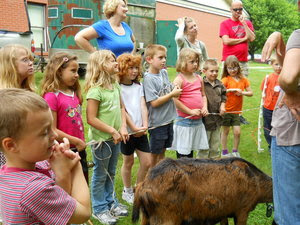 ​ Farm and Field Day a Success!

On Thursday, May 26th, we enjoyed our annual Farm and Field Day! Children rotated through a variety of stations. Stations included: ducks, sheep, circle art, work songs, planting in the production garden, building container gardens, and two games. It was a busy day, but super fun!

We are now finishing up our planting and looking forward to working the gardens over the summer and harvesting in the fall! – Keenan Haley, Teacher, Sharon Elementary School, Sharon, VT

Garden Expansion at the Newton School!

We are deep into planting our three new field plots and our regular raised beds, 7th graders will build two new raised beds, and grade 3 has helped to overhaul our perennial pollinator garden. Last week grades 1 and 2 planted a really sweet pallet-wall garden! Thanks to Michelle at Cedar Circle Farm for the great idea and for donating the plants! – Cat Buxton, Garden Coordinator, Newton School, Strafford, VT

Students from all grades have planted in most of our 13 raised beds, our pumpkin patch, and have tended our fruit trees and berry bushes. Students from grades K-5 will care for the new plantings throughout the next week. Grade 4 has become the school’s new tree steward team; today we calculated how much fertilizer we need per tree and spread our own school-grown compost to ensure excellent soil health! – Cat Buxton, Garden Coordinator, Thetford Elementary School, Thetford, VT

Trek to Taste, an annual celebration of trails, local food, and healthy living will be hosted at Marsh-Billings-Rockefeller National Park and Billings Town Park. The Upper Valley Farm to School Network will be hosting a farm to school showcase that will be highlighting farm to school projects from around the region. Learn about school-based hydroponics, cooking over an open fire, and other hands-on farm to school projects. You can also enjoy guided walks, family games, arts and crafts, demonstrations, an ice cream social, music and more.  www.trektotaste.info.

We are getting ready for spring in Hartland!

• Our K-2 pod has plants growing for our gardens outside. The plants are growing really fast!
• Our 3-5 pod has planted lettuce inside, using our new grow cart from Cafe Services. This will be our first crop and we hope to be eating it soon!
• The 6-8 pod has planted seeds to get ready for their salsa garden.

Our K-5 students participated in a healthy snack competition and each class kept track of what the children brought in to eat. We used the Whoa, Slow, Go guide to calculate points. The students were really excited and proud of what they brought in for their snacks.

Our 6-8 students participated in our annual smoothie competition. Each advisory picked from a list of healthy foods for ingredients in their smoothies. We had 11 judges pick the top three smoothies and the winners will get to make healthy pizzas for lumch.

During all of these events, we had our annual Health Week where FTS provided some of the healthy snacks we had each day. The last day we had a “bring a fruit to school day” and we ended up with so much fruit that we made fruit salads for all K-8 students.