About 100 people attended Vital Communities’ Open House on Friday, December 1. It was an evening of meaningful connection as Vital Communities staff, board, committed supporters, and new friends enjoyed festive food, beverage, and conversation.

Headlining the event was recognition of our Volunteer of the Year, Stacey Chiocchio, who has been contributing to Vital Communities for over 6 years. A 2012 graduate of our Leadership Upper Valley program, Stacey became one of LUV’s most enthusiastic Recruitment Committee members. She then went on to chair this committee, and eventually to lead the LUV Board of Governors. Her promotion of LUV is directly responsible for a fair share of the program’s growth. Not only did Stacey drive the program’s popularity, but her guidance was invaluable as the program manager worked to manage the growing application piles and the program’s development.

Stacey has also been an active participant in the Transportation Management Association for six years, and even brought her enthusiasm and diligence to Flavors of the Valley this past spring. Reflecting on Stacey’s range, a colleague said, “that’s the thing about Stacey, she’s brilliant, but no task is too small.” That might just be the best quality a volunteer can have. Another added, “Stacey is consistently one of the most active volunteers in any group she contributes to. This woman practices what she preaches and does a lot of volunteering for Upper Valley nonprofits.” As the manager of Hypertherm’s community service program, Stacey is leading by strong example.

For the past few years, Vital Communities has run Super Quests: a set of 10 or so themed Quests. To complete the challenge, participants must register and collect a stamp from each highlighted Quest. This year’s was focused on “Miraculous Trees,” and it got participants out to some of the Upper Valley’s favorite forested sites. Every year, completed submissions are entered into a grand prize drawing. This year, we assembled a collection of forest field guides, day passes to VINS, a couple Valley Quest T-shirts and books, and an issue of Northern Woodlands, a Vermont magazine that supports forest stewardship. This year’s grand prize winning team were the “Hartland Hunters,” Chuck and Flo Lucot from Hartland, Vt., and their grandson Aiden, from Austin, Texas. 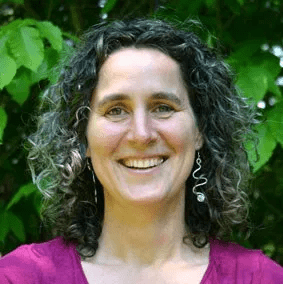 Door prizes were provided by Local First Alliance members. Richard Hoffman won a pair of tickets to one performance of Opera North’s 2018 Summerfest. Hetty Thomae won five free classes at Upper Valley Yoga. Emily Gardner, Mary MacVey, and Sallie Yurkosky each won gift cards to The Pink Alligator. Gift cards to new White River Junction restaurant Trail Break Taps + Tacos were won by Van Chesnut and Karen Glitman, who chose to gift her prize to our 2016 Volunteer of the Year, Molly Drummond. Congratulations to our lucky winners, and thank you to these local businesses! 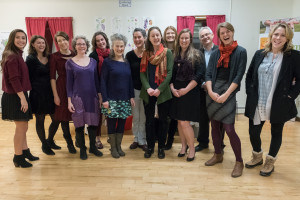 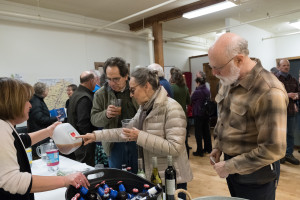 Bartending by The Skinny Pancake.

All photos courtesy of Molly Drummond.